If you haven't used the Cash Game Tax Planning Calculator before and you're a US poker player, especially if you're only playing part-time and don't file your taxes as a professional, now is the perfect time to start. The purpose of this spreadsheet is to calculate a player's after-tax expected value based on their intended poker play for the year. This is important to do in advance, as a few different negative tax effects can easily turn a winning player into a losing player. You'll also probably want to check out the older posts on the Cash Game Tax Planning Calculator, as I'll only discuss the 2013 changes here.

The new spreadsheet is freely available here, with continued thanks to pokerfuse.com for hosting:


Download Here (Excel)
(You may have to give permission for macros to run. There's nothing malicious or objectionable.)

Note that this version of the sheet takes about 3-4 minutes per row for the default recommended loop size of N=1,000,000 when you hit the Calculate button. It's not frozen or broken! If you'd like to test it out to make sure it's working before you embark on a longer run, set N=100 in cell K6 for faster calculation, but keep in mind that the results will likely have significant error for N<1,000,000. Excel is really not an ideal platform for these calculations, but I find that it's not too much trouble to run them overnight. This certainly isn't commercial-grade software, it's merely something I've built for myself that I'm making freely available for the benefit of the poker community. (i.e. bear with it and thanks for your patience!) New tax considerations for 2013

The recent fiscal cliff compromise included a few ways to penalize high-income tax payers... but, as with many pieces of the tax code which attempt to assess income, these income thresholds look at Adjusted Gross Income rather than net income. AGI is a before-deductions figure which includes "phantom income" for amateur poker players resulting from the sum of all losing sessions they play throughout the year. Amateurs report the sum of their winning sessions as income and deduct the sum of their losing sessions (to the extent of their winnings) later as an itemized deduction.

Net taxable income is generally what ends up affecting the tax a player owes, but AGI is overinflated along the way, and that's what these three new rules consider. Thus these new effects will be triggered by many amateur players whose actual incomes are not high at all. (If you need a refresher on poker tax basics, check out the 2+2 tax sticky.)

Other changes in this version include an update of the default tax brackets for 2013 and a bug fix regarding the way deductions were treated in some cases where itemized deductions and amateur gambling losses were less than the standard deduction.

To account for these new tax considerations, there are 4 new inputs in the 2013 version, all of which are located in the Tax Rates tab at the bottom of the sheet. All other inputs are the same as the previous version, and everything else about the sheet, its backend, and its runtime should essentially be familiar. 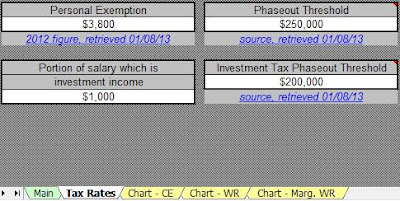 Each of these new effects will only unduly impact amateur players, due to the AGI inflation from their phantom poker winnings; high-income professional players will be paying higher taxes as well, but only when their legitimate winnings exceed the income thresholds. With that in mind, we first look at the case of an amateur player with high phantom poker winnings and thus significant overinflation of AGI.

Consider a high-volume amateur poker player, perhaps a full-time student playing poker on the side as his primary source of income. He has $80k net worth, non-poker income of $3k per year, all of which is from investments, and $3k in non-poker itemized deductions (state taxes paid last year, perhaps). Let's say that he plays in certain poker games such that he has an hourly rate of $40 and a standard deviation of $1,800 per hour, and that he typically plays for 2 hours per session. I'm envisioning a solid winner at multitabling small/mid stakes online here, which is not currently relevant to very many American taxpayers, but I've chosen a higher-variance and higher-volume profile to highlight the potential impact of the new rules. 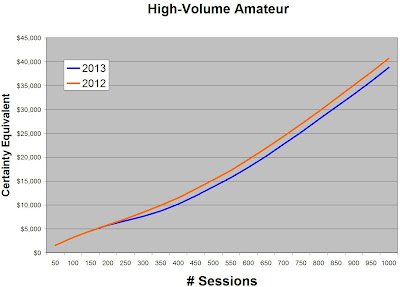 This player will certainly put in enough volume to avoid the classic negative tax effects of the risk of a losing year or the risk of being unable to deduct losses due to not hitting the standard deduction, so we don't worry about that in the graph. However, once his number of sessions increases to about 250 for the year, his expected AGI from the sum of his winning sessions starts to hit the threshold and the effects of the investment surtax and exemption/deduction phaseout start to cut into his profits, leveling off at a maximum effective loss of $2,500 when these are all fully phased out.

The new tax rules won't turn this high-volume amateur from a winning player into a losing player, but they will take a rather high percentage of his average after-tax profit at certain volume levels.

Some low-volume amateur players will already be at or above the income thresholds from their non-poker income, in which case even a single poker session will produce phantom income that will cut directly into the new tax rules. These players are in much worse shape than those in the first case.

Consider a upper-middle-class person with a successful career outside of poker who enjoys occasionally playing poker for fun, but still cares about winning, or at least not losing money in her poker career. Let's say she has $1M net worth, and non-poker income of $250k per year, $20k of which is from investments, and $15k in non-poker itemized deductions. For simplicity, let's say that her choice of game and her winrate profile is the same as that of the high-volume amateur, except that the wealthy amateur fits in far fewer of these 2-hour sessions each year. 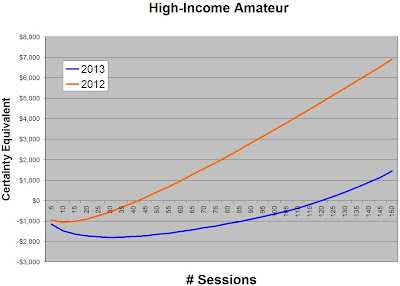 The impact on expected after-tax winnings is dramatic. In 2012, she would have had to play about 40 sessions per year to break even (due primarily to the classic negative tax effect of having a losing year). In 2013, she now must play three times as much volume to break even after-tax, and her earnings are increasingly divergent from what they would have been in 2012. The gap between the earnings lines would continue to grow until all investment earnings were met with the 3.8% surtax and all deductions and exemptions were phased out to their maximum.

Any amateur poker player whose income is at, over, or near the thresholds for the new tax rules will have to be very careful. Depending on their winrate profile and the amount of investment income and deductions they expect to have, many will be forced out of the game.

Many amateur poker players will not fall into either of the above two cases. However, if such a player happens to run well enough during the first portion of 2013, perhaps by spiking a big tournament score, such that the likelihood of hitting the thresholds goes on to become significant, they will suddenly find themselves impacted by these effects.

The spreadsheet is designed to be used on an ongoing basis after every session is played, or at least after any big wins or losses. As another example, a large early realized loss will mitigate the negative tax effect of having losses which, along with other deductions don't exceed the itemized deduction, which will benefit the profitability of future sessions during the year. Running this calculator often will make sure you always know the costs of these new negative tax effects as well as the ones that have always been around.


Everybody's situation will be different, particularly under these new rules, since they are sensitive to the particular amounts of investment income and non-poker itemized deductions you expect to have. If you're a responsible player, you should check out the calculator and to use it to compute the after-tax expectations for your individual situation. Here's hoping that you'll still be +EV after-tax, but if not, it's better to determine that now rather than putting in your year of play and getting hit with an excessive tax bill at the end.

As usual, I am eager to hear your feedback, suggestions, questions, bug reports, etc.

I'm also working on coding a version of the calculator in [R], mostly for my own edification as I learn the language and for my own use. It won't be as pretty or user-friendly, and I am not planning to ever be able to compile it into something palatable to the general public, but it will be faster and more flexible if you're comfortable with code. Feel free to email me if you want to mess around with it.