How much "rake" are we really paying in the WSOP Main Event?

It's time to take our utility function out of the realm of hypothetical coin flips and into the real-world, life-changing arena of the World Series of Poker Main Event, where dreams are crushed and careers are made.

We are told that every poker player's dream is to win this particular tournament. The only obstacle standing between them and their share of an eight-figure prize pool is the enormous field of competitors that it attracts. We're told that the glory of the bracelet is what we should care about, and the possibility of a huge payday and becoming an instant legend in the game keeps emotional motivations at a high and rational risk management at a low.

While the non-financial value of becoming the world champion may be immense, the 1st-place winner doesn't really do that much better than the 2nd-place winner in terms of expected utility on the purely financial value of the prizes. In terms of sudden windfalls in individual wealth, how different are $8.9 million and $5.5 million? As we have discussed, diminishing marginal utility of wealth suggests: not very. Even for the smaller prizes, the real, enjoyable differences between various 5- and 6-figure scores are not nearly as large as they may seem on the payout table, thanks to risk-adjusted utility and its partner in crime, progressive income tax rates. .

Somehow, I feel like it might actually be the case that this article is the first time that anybody has taken poker's flagship event and performed a simple expected utility analysis on it. In the unlikely event that any WSOP Main Event participant is willing to temporarily look beyond his or her dreams of poker immortality and actually consider the real cost of the tournament, here's a starting point. After all, the $10,000 entry fee is a significant amount of money for the vast majority of the competitors. Any $10,000 investment merits some careful analysis.

Let's consider a generic WSOP Main Event competitor with the following characteristics:
After taxes and risk aversion, on average, how much of the $10,000 does our generic competitor get to enjoy?

We use the payout data from the 2010 World Series of Poker and apply the above assumptions. 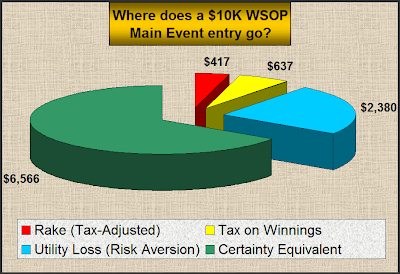 While our assumptions provide a strong caution for the amateur player who has satellited into the event, how about players with different income situations?

Let's take the assumptions on net worth, income, and level of risk aversion and vary them one at a time while holding the others constant.


Changing the player's net worth affects only the blue slice of the pie, the utility loss due to risk aversion. While the player with $80,000 is losing a lot of equity, wealthier players do significantly better.

The player with a $5 million net worth is losing only $392 due to risk adjustments; this might be about the realistic level of wealth where it "makes sense" to play a large-field $10,000 tournament.

People near or below median levels of income should realize that the level of risk of playing in the WSOP Main Event is essentially too much for them from a purely financial standpoint, as the size of the blue slice of the pie reflects.

1 annual poker winnings outside of this tournament, interchangeable with changes in non-poker salary above $40k base

Increasing income from poker has the same tax effects as increasing non-poker salary (as long as at least $10,000 of income is from poker), so we can look at them together.

Higher levels of income for the year help increase the certainty equivalent in two ways: higher wealth leads to lower loss of utility due to risk aversion, and being in a higher tax bracket already helps reduce the negative tax effects of a big WSOP score. For this reason, a higher income for the year makes the tournament more profitable than a similarly-higher net worth, as seen by comparing the two tables.

In fact, if his salary is above $510,000, the player is already in the highest tax bracket and no outcome in the tournament will change the player's tax rate. The effect of this is that the tax-adjusted rake (red slice of the pie) is at its minimum of $336, and the average tax on winnings (yellow slice of the pie) is $0.

If poker/gambling income is reduced below $10,000, the tax effects become enormous as the player no longer gets a tax deduction for losing the tournament. For the player with no poker winnings to deduct against, the average amount of tax he pays for playing in the tournament is a whopping $3,178.


For risk aversion, I found that the value ρ=0.8 for the parameter in the utility function was the best fit for what I expect a normal person's risk preferences to be, but everybody is different and should experiment with different values of ρ for themselves. Lower values of ρ have significant effects on the value of the tournament, but values of ρ that are too low are probably not realistic. As noted earlier, you may not pass up on a 50% chance of winning $8.9 million in favor of a guaranteed $79,806, but when your net worth is as low as our generic competitor, I doubt you'd really require very much more.

Conclusions
Of course, for many, it is worth the costs. The experience of competing on poker's biggest stage with players from around the world and from all levels of the game is unique and perhaps priceless to some.

None of this analysis should be seen as a slight against the WSOP in particular — the huge fields and prizes are what create the appeal of the event, and any other large-field big-buyin tournament would annihilate collective utility in a similar fashion, though perhaps to a lesser extent. Much of the value of the World Series of Poker Main Event is non-financial, and there's nothing wrong with that. Just be sure to consider this against the real hit to your bank account and your economic happiness.

(06/08/2011): I look at the effect of skill edges and optimal hedging ratios in my followup to this post, located here: WSOP Utility Analysis revisited, part 2: How many shares should a WSOP Main Event player sell off?
Posted by Mike Stein at 9:15 AM