WSOP Utility Analysis revisited, part 2: How many shares should a WSOP Main Event player sell off?

Last time, we looked at the relationship between a player's expected utility in the 2010 World Series of Poker Main Event and his skill advantage over the field. Under a particular proposed shape of finish probability distribution, we found that a raw ROI of about 86% (i.e. an average cash of $18,600) was necessary for a player with a typical income, risk aversion, and tax obligation to simply break even in terms of expected utility. Even in a juicy WSOP Main Event field, this is a pretty lofty goal for most, and many near-average players will be forced out of participating on their own dime unless they are willing to effectively pay for the privilege.

Fortunately, backing and staking agreements are common for large-field poker tournaments. Much as the stock market investor would never put a large portion of his capital into a single investment unless it were extraordinarily profitable, the poker player (who "invests in himself" in his poker career) will often benefit from diversifying away some of his risk by hedging his tournament results out to others. If these mediocre winning players players are able to find other parties to put up part of their entry fee in exchange for part of their prize, they will be able to yield a positive expected utility in the event, not only for themselves, but also for their investors.

For the purposes of this analysis, we assume that only option of staking/backing available to the player is to sell off X% of his prize in exchange for X% of the cost of entry (selling shares at 1-to-1, with no markup). The result for the player of such a contract will be the same as if the entire tournament were scaled down by X%. A player can sell off 90% of himself to effectively make the WSOP Main Event a $1,000 buyin tournament for him, with prizes which are exactly proportional to those of the true main event.

For the time being, we are ignoring some other popular forms of staking and backing (listed in the order of likelihood that I might add them to the model in the future):
For now, we consider only the simplest case: shares sold at face value.

Given this opportunity to rescale the stakes of the tournament, assuming that there is an investor willing to buy any amount of shares that the player would offer, how much should the player look to sell off?

Optimizing share-selling for the typical player

Our typical, risk-averse player ($80k net worth, $50k income with at least $10k from poker, risk aversion of 0.8) will realize the following expected utilities based on his skill advantage and the percent of himself he chooses to retain: 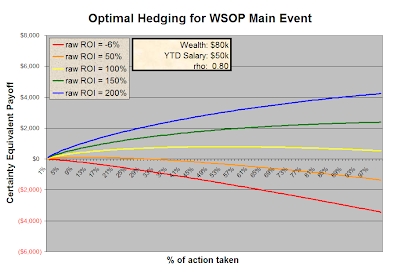 Here, the different colored lines represent different several different levels of skill edge, expressed in terms of raw ROI. The horizontal axis shows the percentage of his own action that the player takes; the amount he sells off is equal to 100% minus this number.

In red — For the player of precisely average skill, who has a raw ROI of -6% (due to rake), we see that, regardless of the number of shares he sells, he cannot realize a profitable opportunity in this event. Since he's a break-even player and is risk-averse and experiences tax effects that are negative on average, he's going to lose utility by playing any poker tournament, regardless of how small he makes the stakes.

In orange — When he was forced to take all of his own action, we recall that the small winner (raw ROI of 50%) was forced out of being able to profit from his small skill advantage at all. We showed that the minimum ROI required for a positive expected utility is 86%, and the chart verifies that if this 50% ROI player were to take all of his own action, he would be losing money after taxes and risk aversion. By selling shares, we see that he can realize a small positive expected utility ($121 in certainty equivalent) by playing for about 12% of his own action. The ability to hedge against the entry fee has allowed the skilled, risk-averse player to realize a profitable opportunity where he otherwise could not.

In yellow — This solid winning player (raw ROI of 100%) is a strong enough player that he will realize a positive expected utility even if he takes all of his own action, as we can see by the yellow curve being completely above the x-axis. However, we see that this player will realize an even higher expected utility by selling off some of his action than by paying his own way entirely. He'll improve his certainty equivalent payoff from $532 to $805 by selling off roughly half of his action.

In green — A bigger winner (raw ROI of 150%) turns out to do best by playing for all 100% of his own action. The investment has become so profitable that even a risk-averse individual does best by taking it all on and not hedging it out to others.

In blue — This big winner (raw ROI of 200%) has similar results to the green player above.

If we keep the player's relative risk aversion fixed at ρ=0.8 but increase his wealth from $80k to $500k and his annual income from $50k to $100k, he becomes more able to handle his own risk: 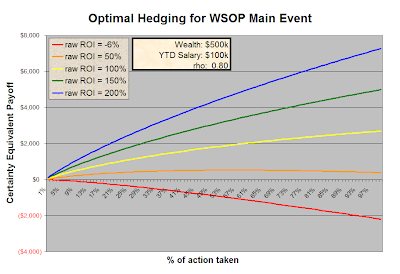 The breakeven player is, of course, still unable to profit, and it turns out the 50% ROI player still benefits slightly from selling off some of his action, but overall, the additional risk tolerance incentivizes this player to hold onto all or most of his own action.


Alternatively, instead of adjusting wealth, we can reduce the player's relative risk aversion from ρ=0.8 to ρ=0.5, representing an individual who is more willing to take on risk (at least for the special occasion of the WSOP Main Event, perhaps): 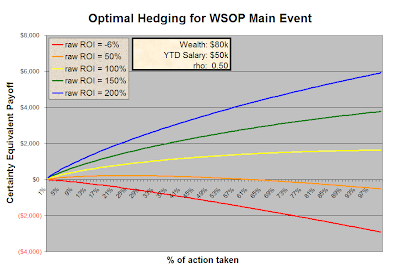 The nature of the effects is similar. It is worthy to note that the orange curve (raw ROI of 50%) is similar to that of the original analysis for the more risk-averse player, suggesting that a small winner with an average wealth should still be selling off most of his action regardless of his personal preferences for risk. On the other hand, it looks like the yellow curve (raw ROI of 100%) has become roughly the point where the player will prefer to take 100% of his own action for this particular level of risk aversion, so players with significant skill edges should be more inclined to take all of their own action if they have a higher tolerance for risk.

Thanks to the complexity of the utility function and the sheer number of different payoffs, there is no simple way to express a formula for the curves we've found above. In order to calculate the optimal hedging percentages (i.e. the percentages of action to take which correspond to the maximum points of these curves), we proceed numerically.

Here, we disregard the ρ=0.5 case treated directly above and consider only the first two cases: the original "typical player" (in yellow below) and the "wealthy player" (in green below): 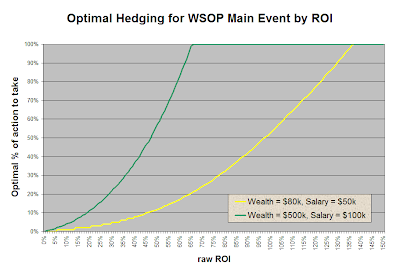 (Ignore the jaggedness of these curves; the negligible inconsistencies are a consequence of the numerical error of Excel's goal seek solver.)

Rather than only considering five different specific values, this chart looks at every possible value of raw ROI and provides a more comprehensive practical resource.

The optimal percentage of his own action that the player should take seems to increase in a convex way; as the player increases his skill edge over the field, the optimal percentage that he should keep increases faster at higher values of ROI. For both the typical player and the wealthy player, there is a "ceiling" level of minimum ROI at which the player should take all of his own action. We see that this is about 136% for the typical player and about 66% for the wealthy player.

These charts should provide a useful guideline for real-world staking and backing decisions for large-field tournaments. Some practical notes:
Let me know if you'd like to see me add the considerations of other types of staking and backing contracts to this model. And, as was the case with my risky site bankroll management model, this is a model with many specific variables (wealth, income, risk preferences, ROI, tournament field size, tournament payout distribution) that would ideally all be tailored to each specific player and each specific tournament on a case-by-case basis.

This is a model that should be of tremendous practical value to all tournament players, so if there is enough interest, I might clean up my spreadsheet and make it publicly available in the future.
Posted by Mike Stein at 6:43 PM