Is it ever rational to pass up on a unique risk because you "can't reach the long run"?

Yes, as it turns out.

More generally, optimal game/stake selection does depend on what future investment opportunities will be available to you. The premise of the question is a little misleading, because, in fact, whether or not to take ANY risky opportunity today (even in choosing a game to play regularly and "reach the long run" with) depends on how many times you intend to play that game. The intuition, however, is clearest when thinking about rare opportunities with abnormally high risk.

For example, is it possible that it's "not worth" playing the WSOP Main Event because it is so high-variance and only occurs once a year (so you "can't reach the long run"), but that the exact same tournament would be worth playing if it occurred more often, such as once a month? It can be tough to reason through this with intuition alone, but it turns out to be pretty easy to show as a consequence of either rational risk aversion and/or progressive tax rates.

An example of a unique opportunity

Let's take the usual example of a "typical" poker player with our usual after-tax utility function, $80k net worth prior to this year, and $40k income on the year (assumed to be all from poker, otherwise tax effects will shift).

Suppose this player were to come across the unique, one-time opportunity on December 31st to risk $10k on a weighted coin flip with a 51% probability of winning $10k and a 49% probability of losing $10k. A +EV opportunity, but a significant percentage of the small-stakes grinder's bankroll. What to do?

Which of these two outcomes is higher and whether or not the player should take this risky opportunity will depend on both his risk preferences and his tax bracket. We can look at his optimal decision for each different possible value of his year-to-date poker winnings:

The rows denote his current year-to-date poker winnings and the columns denote how many opportunities he will have available to take this coin flip (in this example, only 1).

Here, since his year-to-date poker winnings are $40k, he should pass on the opportunity. He would need to be up $100k on the year for it to become a profitable opportunity after adjusting for risk aversion and taxes. We see that it again becomes unprofitable in a higher region, when he has $170k or $180k, which we will discuss later.

If the opportunity is not unique 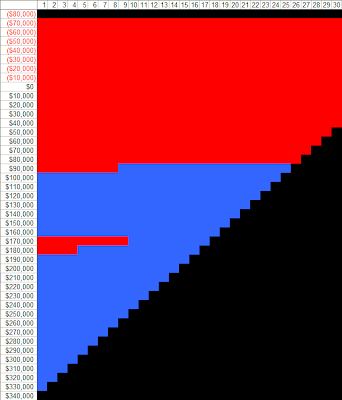 This chart is simply an expansion of the first one, with additional columns added. The leftmost column agrees with the first chart, and it treats the case where the player will have only one option to take the opportunity. From that, we can calculate the next column over, where he will have 2 separate opportunities to take the coin flip.

Before we discuss the results, let's first look at what's causing the different shapes between the red and blue regions. Is the particular form of his decision strategy being shaped by risk aversion, tax effects, or both?

Without risk aversion or taxes

If we set our player's risk aversion to zero and remove the effect of taxes, then, as we might expect, he always takes the opportunity: 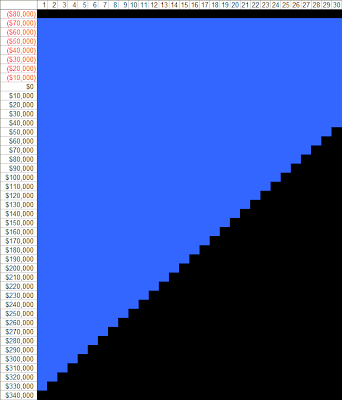 Without risk aversion or tax effects, all that matters is whether or not the opportunity has a positive expected value. It always does, so he always takes it.

With risk aversion, without taxes

If we return the player's risk aversion level to ρ=0.8 but still ignore taxes, then he starts to pass on the opportunity when his bankroll is too small to afford the risk: 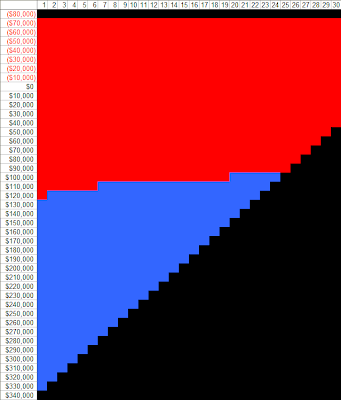 Here, we see that, with only 1 chance at the opportunity, the player will need year-to-date winnings of $130k or more in order for the coin flip to be profitable after adjusting for risk.

With taxes, without risk aversion

If we go back to ignoring risk aversion but add in the effects of federal (and the negligible effects of NJ state) income tax, we see some different shapes in the chart: 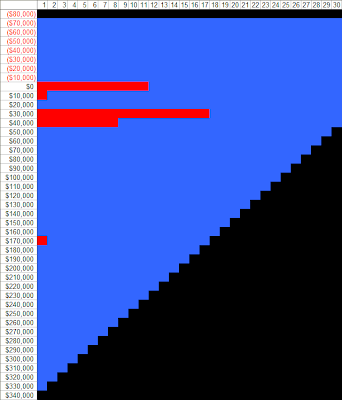 Without risk aversion, the only factor that would keep the player from taking this +EV coin flip would be adverse tax consequences. Here, with 1 opportunity left (the leftmost column), we see a few regions where the player will pass on the coin flip. These turn out to be the regions where his tax bracket would change based on the outcome of the opportunity.

For example, the player passes on the coin flip when his year-to-date winnings are $0, because he gets no tax deduction if he loses and hits -$10k, but will have to pay some income tax if he wins and hits +$10k, which turns out to be enough to turn the +EV opportunity into a -EV opportunity after taxes.

The effect is similar at $10k, $30k, $40k, and $170k; a win or loss at any of these points will cause a significant jump in the individual's marginal federal tax rate. This is a great illustration of how progressive taxes create additional risk aversion when a risky opportunity has the possibility of changing one's tax bracket (cough cough).

With both risk aversion and taxes

Combining both risk aversion and taxes, we get back to the first full chart, where both "shapes" of red regions can be seen together:

Keep in mind that the implications about unique situations here are about situations with a uniquely high mean/variance tradeoff compared to normal play. All that matters is the shape of the probability distribution, not the particular nature of the opportunity.

For example, if you play $100 heads-up sit-and-goes for a living where you win 55% of the time and lose 45% of the time (ignore rake), and you happened to come across a one-off investment opportunity (perhaps a prop bet) where you could have a 55% chance of winning $100 and a 45% chance of losing $100, that's exactly the same as your usual heads-up sit-and-go, and you should take it. It doesn't matter that this particular opportunity will only happen once; the laws of probability only care about the distribution of the payoffs, and this will "reach the long run" along with your usual results. It doesn't matter that you "can't reach the long run" with a unique opportunity if you'll be able to reach it with other opportunities with similar (or riskier) payoff distributions.

While coding this algorithm in more complicated cases becomes more difficult, there are some powerful prospects for expansion of this model:
This work so far is quite preliminary and mostly just an illustration of what sort of results a full model would produce. I hope to code the more complicated framework with multiple game choices and normally-distributed payoff distributions in the future — a program that could execute the complete model on an ongoing basis would be very practical.
Posted by Mike Stein at 3:28 PM