To play or not to play: Optimal game selection with risky operators

There are few certainties in the post-Black Friday online poker world. One fact that we are all still sure of is that nothing has changed with respect to the fact that playing online poker is legal on the federal level in the U.S. If an American player finds a poker site willing to take his business, and if he can manage to get his money to and from that site, he is not violating any federal law by doing so.

So while the remaining U.S.-facing online poker sites are unlikely to be anywhere near as large, reputable, or financially liquid as what players are used to, as long as the risk of losing one's funds is small enough, there may still be some (severely-reduced) profit opportunities for American poker players, or, at the very least, a means of continuing to stay competitive at poker by practicing one's skills at one's leisure.

The remaining U.S. sites should be expected to be different than PokerStars and Full Tilt Poker in at least a few incredibly important ways:Not too comforting. To be sure, even if playing on the remaining smaller sites is otherwise acceptable and a reasonable substitute for the experience of pre-Black Friday online poker (which will not be the case for all poker players), these issues are serious and will annihilate a lot of utility. These added risks cause players to have to make tradeoffs involving their profit potential and the amount of money they risk in their account balances at these sites.

Putting it all together, how big are these costs? How bad do these risks have to be before it's not worth even trying to continue to play online? We can quantify this with a model which can estimate the effects of these risks on expected utility through Monte Carlo simulation.

We start by making assumptions about various aspects of the risks and costs of playing on these sites. Some of these are deterministic, and others will be uncertain. Once we have settled upon reasonable estimates of these values for all of these parameters, we can vary the most critical parameters to find break-even thresholds for expected utility, which can guide player decisions.That's a lot of inputs, and a lot of inputs that we can't necessarily get great estimates of. Since the non-standard parts of this model are those pertaining to the risks of having money with the online site, we can ignore the lesser (or at least more standard) uncertainty on personal game performance parameters and instead assume that we know the player's exact winrate.

We'll again work with our typical poker player: $80k net worth, $40k non-poker income, $10k year-to-date poker winnings, and isoelsatic utility with ρ=0.8, paying both federal and NJ income taxes. For simplicity, we'll assume that any money lost due to site-specific risks is treated the same as a poker loss and directly deductible against poker winnings, though I believe this is not exactly true.


UPDATE 06/18/2011: The above assumption may only be valid for those who file their taxes as professional poker players. Amateur poker players likely cannot deduct these losses at all in most cases, and this has serious implications for the model. See Update/correction to risky site model: Casualty losses and tax effects.

I'm not entirely familiar with costs of deposit and withdrawal at all of the remaining U.S.-facing poker sites, but for Carbon Poker, it looks like roughly $17 in costs to make a deposit, and about $5 per withdrawal for a medium-volume player.

We'll look at two possible levels of stakes for our player: multitabling $0.25/$0.50 NL at an hourly winrate of $10 with a standard deviation of about $70, or multitabling $0.50/$1.00 NL with an hourly winrate of $15 and a standard deviation of about $140. His $0.50/$1 winrate is higher in dollars, but lower relative to the stakes, which introduces not only the usual higher relative risk to his results, but also a need to keep a higher balance with the site. Keep in mind that he will have a much tougher time achieving these winrates on a remaining U.S.-facing website, since the player pools will be significantly tougher and it may not always be possible to play as many tables as he would normally be accustomed to. In the post-Black Friday market, I would expect winrates to be significantly lower than the good old days, and most players should probably drop down at least a level or two.

We'll have him start playing in early May, so there's about N=240 days left in the year.

To calculate the expected utility of playing with these risks, these winrate parameters, and this utility function, we will simulate the system through the following steps:

For the parameters we chose, we can look at how the results change as we perturb the most uncertain parameters, those related to site-specific risks.

First, if we disregard the assumption of getting paid 50% of the time if the site closes, and instead vary that, we can see what the effects of additional liquidity are and find the break-even liquidity level. Since this liquidity and the probability of successful cashouts are linked, it is desirable to adjust both at the same time, so as we vary the liquidity level, we will assume that the risk of losing a cashout is always half the risk of losing a bankroll in the event of closure. 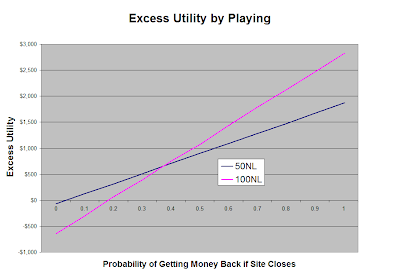 The rightmost point is when the site is fully secure, which is what decision-makers have been roughly used to in the pre-Black Friday environment. In this case, the player prefers to play his more pure-EV-profitable stake of 100NL. As the site gets less and less secure, the need to keep a higher bankroll at the site for 100NL will create more and more risk, and 50NL becomes better when the site liquidity falls below about 38%. For less than 5% liquidity, the increase in the player's utility by playing either stake is negative, so the player should refrain from playing at all, unless the entertainment value or the value of being able to practice and work on his game is worth the cost.


If we return the liquidity probability to its original default rate of 50%, we can instead look at how expected utility varies with the per-day probability of site closure. 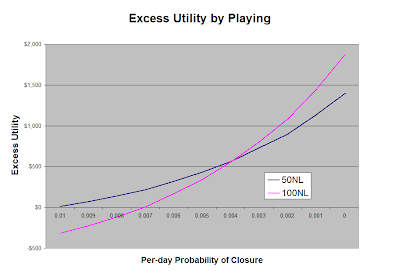 When changing the average lifetime of the poker site, we see that the effect is less linear. Again, the rightmost point corresponds to perfect safety, a site that has no risk of closing. As the probability of closing is increased (and we assume a 50% chance of not being able to get money back after closure), the expected utility drops off significantly. 50NL overtakes 100NL around a per-day closure probability of 0.004 (i.e. a mean lifetime of 250 days). Not playing at all becomes the best choice at a per-day closure probability of around 0.01 (i.e. a mean lifetime of 100 days).


If we return to the original, fixed best estimates of these parameters (50% liquidity, average site lifetime of 500 days), we can tweak the deposit and withdrawal strategies to see which one works best. We'll stick with just 50NL here, since it seems to be the better choice. We need to keep the lower deposit threshold at $800 in order for the player to have enough bankroll to be able to play a bunch of tables of 50NL during his sessions, but we can vary the other three account balance strategy parameters.

We see that we can actually do better than the deposit and withdrawal strategy that we initially chose. It turns out to be better to wait to withdraw until at a higher balance, but still to deposit up to just $1,200. I suppose that this asymmetry comes about due to our utility function; we have a higher relative risk tolerance when we have earned more money on the year. We see that the "tightest" deposit and withdrawal thresholds do not do well here. This is all due to the interplay between the site-specific risks and the costs of moving money, and this behavior will probably change when any of these are modified.

If we compare the middle parts of each of the graphs to the rightmost points (which correspond to perfect safety), we can really see how much our utility suffers under these new risks. Players will need to have significant edges over their competition to overcome this.

In these results, the "shape" of the results is no surprise. We're not seeing anything we wouldn't have been able to guess without doing the math, but quantifying it provides a useful framework for guiding our play decisions under the uncertainty of the site-specific risks.

For our example player here, we see that, under the default assumptions with 50% liquidity and an average site lifetime of 500 days, playing 100NL will be a better risk-adjusted value than 50NL, though it's close enough that the player should move down if he feels the liquidity risk is greater, or that the sites have a significantly shorter expected lifetime. To dissuade him from playing entirely, there would have to be either a very low probability of getting paid back if the site closed, or withdrawals while the site is still operating would have to be less than 50% likely to go through. So, for this winning player, it looks like playing on a remaining U.S.-facing website should be better than quitting entirely as long as he has at least some faith in the current market. Many less skilled players with thinner winrates will be forced out of the market entirely from these additional risks.

This model is well-suited to being dynamically updated as the year goes on. The time horizon and year-to-date winnings will change constantly, which will shape bankroll decisions. Also, it should be useful to update the site-specific risks with better estimates as time goes on and as more information develops in the wake of Black Friday, or as the market positioning of the remaining U.S.-facing sites change.

While it's easy to see results by varying the site-specific parameters in this model when the player-specific variables (utility, income, winrate, etc.) are fixed, it's hard to draw broader conclusions over a more general player base. This is the sort of model that is best applied on a case-by-case basis, with each user's particular play variables fixed and known. If enough people are interested in using the spreadsheet I wrote for this, I might consider cleaning it up and hosting it somewhere.
Posted by Mike Stein at 8:12 AM