WSOP Utility Analysis revisited, part 1: How much of an edge is necessary to overcome tax and utility effects in the WSOP Main Event?

A few months ago, I looked at the true costs of playing the WSOP Main Event for the typical player after adjusting for the effects of tax and risk aversion. It's worth a read if you missed it. Overall, we found that there are significant tax and utility effects that a player must overcome, and thus that there is significant extra effective rake in playing the event.

Exactly how much of a skill advantage does a prospective WSOP Main Event player need in order to overcome this effective rake? Can we... quantify it?

The old model was built on the assumption that the average player was equally likely to finish in any of the 7,319 places in the tournament. To allow for our player in question to have a level of skill different from that of the rest of the field, we need a way to map player skill to a specific finish probability distribution, a specification for the probabilities of finishing in each of the 7,319 different places.

If we generalize our scope to a tournament with N players, then we know that, when all players are equally skilled, each player will finish in each place with probability 1/N, as we've stuck to in the old model. If a specific player has a different strategy than the other players (whom we will assume to all still be uniformly skilled), then what does his finish probability distribution look like?

We quantify skill through the typical tournament results convention of raw ROI, which we define as the player's pure return on investment in the absence of tax and utility considerations, but including the rake. For example, in the WSOP main event, since $600 of the $10,000 entry fee goes to rake, the average player's raw ROI is -6%. This is ROI as it is commonly used in discussions and in tracking software; we add "raw" to convey that it is in pure dollar terms, without utility or tax effects. Since this is the measure of skill edge that is commonly used, it is desirable for us to define our correspondence between player strategy and finish probability distribution by creating a mapping between raw ROI and a probability distribution.

However, there is no reason that the increasing increments between each place should be equal throughout the entire distribution, as they are here. Our simple guess may not approximate reality very well. There's also another problem with this family of distributions: it turns out that we can't capture every possible ROI (from -100% to a certain 1st place) through this type of distribution.

Note that this model, as well as all of the forthcoming models, produces the desired result of uniform probabilities of 1/N when we set the player's skill to zero.


A second naïve guess for developing a family of finish probability distributions is to reframe the tournament as a series of heads-up matches, and to give our player a specific probability for winning each heads-up match. This generalizes through logarithms to tournament field sizes that are not powers of 2. In this approach, we get a different probability distribution depending on whether or not we start from the probability of getting 1st place and use conditional probabilities downward through the places, or whether we instead start from the bottom and "condition upwards". If we condition downwards, this distribution looks like:

This is again an increasing distribution, and one that should make sense for a bona fide heads-up tournament with 2^k players, but other than that, there is no intuition as to how it might apply to a non-heads-up tournament.


The most elegant and accurate approach that I've come across is one based on the following foundation: we assume that a single player who is superior to his uniform opponents and who is playing in a tournament with equal starting stacks (as is the case in real poker tournaments) might have a similar finish probability distribution to a player who is not superior to his opponents, but instead starts the tournament with a larger chip stack than the rest of the field. (Thanks to Aaron Brown for this idea for modeling finish probability distributions, and if you enjoy both poker and finance and have not read his excellent book The Poker Face of Wall Street, you are missing out.)


A superior player's skill edge in a tournament could be approximated in a model that removes his strategic advantage but instead gives him a larger starting chip stack.

From this point, we just need a way of mapping one's chip stack to one's finish probability distribution. The most popular method of this is the Independent Chip Model, i.e. the Malmuth-Harville tournament chip valuation algorithm, and that's what I've chosen to use, as it happens to produce an identical result to instead parameterizing the player's skill edge by starting with his probability of finishing in 1st place and then conditioning downwards. We don't get a closed-form formula, but we get an iterative formula that is easy to implement in Excel:

See The Mathematics of Poker for a discussion of other methods of tournament chip stack valuation; it seems that Malmuth-Weitzman is the only reasonable competing theory to ICM out there, and it only differs from ICM in how a busted player's chips are distributed among the remaining players on average. I haven't spent too much time thinking about the differences between these models. My understanding is that each of them diverges from real historical tournament results, though I do not know if anybody has analyzed this rigorously.

The hard part's done! Now we can just take this parameterized finish probability distribution and plug it into our good old WSOP Main Event expected utility analysis and see what we get. 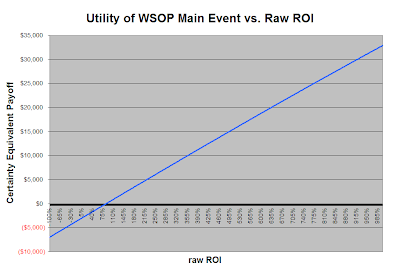 We see that, under this model, the relationship between the CE payoff and the player's raw ROI is close to linear. Examining the data confirms that this visual intuition is accurate.

In particular, we see that, for our typical player ($80k net worth, $50k income with at least $10k from poker, risk aversion of 0.8), the ROI needed to simply break even after tax and utility considerations is 86%. So that answers the question we were left with when we first looked at expected utility analysis for the WSOP Main Event.

Being less naturally risk-averse also brings down this threshold. The typical player with $80,000 net worth and a YTD salary of $50,000 needs only a 61% ROI if we reduce his ρ from 0.8 to 0.5. Further reducing ρ to 0.2 still leaves him needing a 33% ROI. Reducing it all the way to 0 (i.e. no risk-aversion, and utility is realized on the full amount of dollars remaining after taxes) brings it down to a 11% ROI. Risk aversion is demanding a higher minimum skill level than tax effects are.

That's all for today, since building the finish probability distribution took so long. But now that the hard part's out of the way, we can play around with our expanded model in some other practical ways.

Note that I realize that this year's WSOP Main Event is likely to have far fewer than 7,319 competitors. For a smaller tournament, both tax and utility effects will be lessened, and lower skill edge will be necessary to overcome these. It would be interesting to generalize this model to an arbitrary N-player tournament, if there were an algorithmic, standardized payout formula that covered all possible field sizes. (Does one exist for any popular tournament series? Drop me a comment if there is one.)

For now, knowing that a player with typical risk aversion and tax effects will need to have a pure expectation of $8,600 in the WSOP Main Event is a pretty valuable baseline that can guide decisions. This again illustrates how the large field size and high buyin of the WSOP Main Event effectively crowds out the average player form participating — unless that player is willing to pay a high effective cost.

But what if the player could reduce the size of the buyin for this event?

Next time, I look at the possibility of the player being able to sell off some of his action at 1-to-1 (i.e. no markup), which effectively reduces the buyin from $10,000 to something more manageable for less wealthy players. Indeed, doing this can change an unprofitable opportunity into a profitable opportunity for the risk-averse tournament player.

For different levels of raw ROI, we will solve for optimal percentages of one's action to take in the idealized WSOP Main Event. This should be valuable information not only for prospective tournament players, but also those that might buy shares in them. Stay tuned.
Posted by Mike Stein at 8:56 PM