20 thoughts on skill vs. chance in poker, part 20: Summary and assessment of approaches to predominance


To bring our long journey to a close, it is worthwhile to condense the wide array of different perspectives we've treated on predominance of skill and chance into one central list. If predominance is a question with no perfect answer, which answer is the best one?

The approaches are presented roughly in order of least-consistent to most-consistent by my assessment, with the tables are broken up by the type of approach to predominance being used:
Emotional Approaches

While a fundamental, non-outcome-based approach is warranted for the quantitative question of predominance of factors within a game, we see that most of these fundamental approaches are based on superficial elements of games. With that in mind, in a desire for consistency across different game durations and different player populations, I think that the most appropriate approach to predominance is:


Any closed, multiplayer game with any amount of skill should be classified as a game of skill.
There's simply no other well-defined way to handle games of mixed skill and chance. There can't be anything in the middle of the axis of relative influence of skill and chance without arbitrarily locking in a specific game duration and ignoring the possibility of legally redefining games to be longer matches. Furthermore, as we've seen, the approaches that do implicitly specify a game duration find themselves relying on further assumptions about the type of player to measure, the specific skill/chance metric to use, and what it means to "control" an outcome. There's simply no clear alternative. 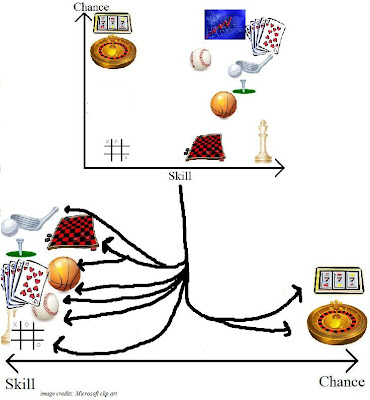 The only consistent solution is to push every game in the middle to one end or the other. It is clear that skill is, historically and practically, the more important property.
The approach that I recommend is a simple, clean, readily-applicable cut across the set of all games. In particular, it classifies all conceivable games within the broad family of "poker" the same way, which very few other approaches do.

Moreover, I believe this is consistent with the social intentions of treating games of chance and games of skill separately in the first place. Games of chance offer no personal or social benefits other than the pure entertainment value for participants who choose to play them. This shouldn't be ignored, but games of strategy offer that and much more. Strategy games ("mind sports") are the mental analog of physical sports and thus are valuable to society for the same reasons that physical sports are, perhaps moreso in an era where more and more careers demand mental acuity rather than physical prowess. Strategy games with random components teach valuable and broadly-applicable lessons to a human brain which is very poorly-equipped to handle randomness without training.

Economic concerns about wealth changing hands and desire to regulate activities which might attract problem gamblers are a bit of a red herring as they might relate to predominance, as these can certainly both take place within games of skill. (While this is outside the scope of this essay, nothing I say here should be taken as ignoring the existence of problem gamblers in poker.) It is clear to me that casino games, lotteries, and markets deserve different regulation and treatment than that of strategy games.

One possible practical tweak would be to limit this approach to games with nontrivial strategic depth, i.e. no betting on a tic-tac-toe where ties are resolved with a coinflip. This could be handled by a case-by-case observation of the strategy differentials between players of a game as it is commonly played. This leaves the question of how much of a strategy differential would be needed, but that's an easier question than predominance in general. In practice, any game with real-world players who don't all adopt the same strategy should be suitable.

As a final mathematical note, in the formal structure of applying a metric upon skill and chance simultaneously as we discussed earlier, classifying all games with any amount of skill as games of skill is analogous to a lexicographic ordering over the dual inputs of skill and chance. To map games into the axis of relative influence of skill and chance, the lexicographic ordering first sorts all games according to their degree of skill and only sorts by the degree of chance to break exact ties in skill, much as how words are ordered in a dictionary by first sorting by the first letter of the word and only using the second letter to sort among words with common first letters. For example, chess and rando chess are an exact tie in skill, but rando chess has more chance, so chess would be sorted to have a higher relative influence of skill over chance than rando chess. More practically, a poker cash game where players could run it twice (or infinite times) would have a higher relative influence of skill over chance than a cash game without this option.

The most important idea to keep in mind when handling any aspect of skill vs. chance or gambling vs. not gambling in poker is that poker is very similar to most other strategy games with random elements such as bridge, Magic: the Gathering, and Scrabble. No logical approach to predominance could classify poker as predominantly chance in a way that doesn't also necessarily classify some other strategy games or variants thereof as predominantly chance. There is nothing fundamental to poker that isn't also fundamental to other competitive strategy games. Poker is unique in its popularity, the stakes for which it is currently played, and its marketing as and historical treatment as gambling, but is not unique in any structural way.

Really, in light of this, it's not fair that the onus is on the poker community to prove that poker is a game of skill. The onus should instead be on those who wish to classify poker as a game of chance and, as we've seen here, it's much more straightforward to find issues in those approaches than it is to blindly stab in the dark with a dozen different and imperfect intuitive arguments as to why poker is a game of skill. In many ways, the entire suggestion of there being a "debate" over skill and chance in poker is a bit of a farce.

One final issue that I have with the undefined notion of predominance is that there is no record or case history (that I'm aware of) of the test ever being actually quantitatively applied to any game. We are living in an era where games in general are proliferating and overlapping new and different parts of our lives. Don't game designers deserve clear guidance as to what they can and can't do with chance in their games without falling into classifications as gambling?


Again, it is worth acknowledging that I have no expertise in law and have significantly simplified the legal definitions of predominance, which vary from state-to-state and across countries. I also have been generous in my assumption that mathematics has any direct bearing on interpreting law, as much of this depends on politics and intuition over logic. It'd be great if we could get a more formal, consistent definition of the legal statutes of predominance, but, in the real world, the PPA is doing a great job of managing these different arguments in making real progress for our game, despite the lack of complete logical consistency of most of these arguments. Nothing I have said here should be seen as undermining the excellent efforts of these parties.


Thanks for reading. I'd be happy to expand upon any of these ideas for any effort which aims to improve public awareness and understanding of poker or for anything which could contribute to legal arguments. Really, though, I'd love to continue the discussion with anyone at all, so if you're interested in talking with me about any aspect of this essay, please contact me!
Posted by Mike Stein at 12:45 PM