20 thoughts on skill vs. chance in poker, part 6: An impractical dependence on game duration


All outcome-based approaches to predominance will conclude that a game is predominantly skill if the game is played for long enough. Whether the approach be a measurement of how often the superior player wins, of how many instances of a game must take place before the expert player will be ahead with probability x, or of what the interplay between the means and variance are for winrates in the game, our good friend the Central Limit Theorem will ensure that it's only a matter of timescale for any of them. 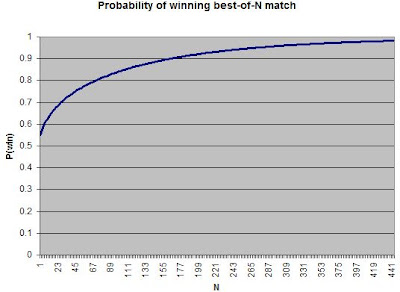 Any game, when played as a best-of-N series for a large enough N, will result in the superior player winning with an arbitrarily-high probability.
When a legal system attempts to classify the permissibility of games based on an outcome-based measure of predominance, this would mean that any game of predominantly chance but nonzero skill would become a game of predominantly skill if extended for long enough. One restructuring that would work on any two-player game with a single winner would be to legally mandate that the game be played as a best-of-N series for a large enough N. So a world in which a legal code uses an outcome-based approach to predominance and classifies some games with skill elements and finite variance as games of chance is a world where the law effectively mandates minimum session lengths of games.

Would a rule like this ever be put into place? From a public policy standpoint, this is pretty plainly bizarre, instills artificial inefficiency, and is not in line with any presumed intent behind separating games based on predominance in the first place. This has been acknowledged at least once in the government response to pre-trial motions in the Black Friday proceedings.


The answer to that question depends on, among things, whether one is talking about a single hand of poker or something else. It is a mathematical truism that in any game involving both chance and skill, the element of luck will tend to be evenly distributed the more times the game is played such that even in a game that is 1% skill and 99% chance, the player with the greater skill will prevail in the long run. See Three Kings Holdings LLC. v. Stephen Six, 45 Kan. App. 2d 1043 (2011) (affirming trial court’s holding that a “single hand” analysis applied under the predominance test). Additionally, the more evenly matched in skill particular players are, the more luck will predominate.

To the best of my knowledge, nobody has ever actually explored the possibility of redefining and legally mandating games to have a forced minimum length, despite the fact that, in terms of theory and construction of games, it would be reasonable to do so.

It turns out that the common way to resolve this paradox is to ignore the potential ability to redefine and legally mandate games to be played as best-of-N series and to instead focus the analysis to the smallest possible interval of play in any given game. Unfortunately for cash game poker, unique among all popular competitive strategy games, this time interval is both extremely short and not representative of real-world patterns of play: one single hand. This isn't necessarily impossible to overcome, as many courtroom arguments do indeed work along the timescale of skill predominating over a single hand, or, in the case of tournament poker, a single tournament. If convincing, intuitive enough arguments can be made with these restrictions, then that's certainly the best approach, but the impracticality of focusing on a short time interval that almost nobody chooses to play is unfortunate.

Maybe legal mandates on minimum game length are not as preposterous as they seem. They might be most easily-imposed online, where a depositing player could be prevented from initiating a withdrawal until a certain number of hands or tournaments were played, similarly to bonus money with a play-through requirement. This sort of online model would let the player break up his required play over multiple sessions while preventing the possibility of realizing winnings before the necessary amount of play was put in, which would be difficult to control for in live poker. Very few players would end up being inconvenienced, if the requirements were reasonable.

It would be interesting to see how a judge would respond to a business which employed this model, but, really, the point of highlighting this impractical consequence is to illustrate how counterproductive and nonsensical the very idea of predominance is, not to assent to it. A game is a game with constant characteristics regardless of who plays it and regardless of how long its players choose to play it. If, to echo a popular assessment of poker, a game were a "game of skill in the long run, but a game of chance in the short run", what exactly is it that's changing in the fundamental nature of the game between those two durations?