20 thoughts on skill vs. chance in poker, part 8: How are we measuring skill, anyway?


At the beginning of this series, I temporarily assumed away that there was a reasonable and consistent means of individually measuring either the amount of skill in a game or the amount of chance in a game, but this is far from obvious.

Let's forget about chance for a moment and consider only how to measure the amount of skill in a game. Certainly, in some cases, we can add or subtract game elements to existing games that would clearly increase or decrease the amount of skill in the game, e.g. poker with deep stacks could easily be said to have more skill than very short-stacked poker, or poker where nobody was allowed to look at the river card would likely have less skill than normal poker. Directly comparing two different real-world games, however, is difficult and has no clearly-motivated approach. Does chess have more or less skill than 200bb PLO? Does bridge have more or less skill than a heads-up sit-and-go? Can there possibly be a way to quantify this?

Perhaps not. I would say that there's no way of constructing a well-ordering of skill-ness on the space of all games, that is, it might not be possible to compare every pair of games under a skill metric. When games have disparate skills along completely different dimensions, there might be no objective way to say which game is tougher. To put it another way, if we're using the standard inequality symbols to denote ranking the amount of skill between games, it could be the case that neither "poker <= bridge" nor "bridge <= poker" is true. We'll be able to order some games against each other ("50bb poker >= 20bb poker"), but not all of them. Rather than a well-ordering, the best we can hope for is a partial ordering.

The same is true for measuring chance. There are explicit ways to add a strictly positive amount of chance into a game, like increasing the probability of reversal in rando chess, and ways to remove chance, such as splitting pots where players are all-in before the river in a poker cash game according to pot equity. But if disparate types of randomness are changed at the same time, the result could have no clear basis for comparison. If a poker variant were to roll a die after the river action and deal a 6th card whenever the die came up 1, but the stacks were made deeper, this game would not compare directly with regular poker.

Not only is there not necessarily a well-ordering on either skill or chance, but even a well-ordering isn't enough for what the predominance test presumes. There can be well-orderings that don't induce measures or quantifications. For example, one can order the set of all foods according to which foods one prefers the taste of so that one always have a preferred food among every pair of possible foods, but this doesn't endow us with a way of measuring how much we prefer one food over another. It doesn't make mathematical sense to say that pizza tastes twice as good as hamburgers (what would the units be?), and measuring skill in games is similar.

If, as is often informally presumed, there were indeed individual metrics on each of skill and chance, then, as we've seen, there would still be no clear unique way to combine them onto a single scale for predominance, but we'd be a lot closer to having consistent ways of doing so.

If we didn't quite have that, but instead we had a well-ordering on each of skill and chance, then we'd immediately get at least a partial ordering on the predominance scale. Recalling the two-dimensional chart from before (and remembering that the placement of games is illustrative and nonscientific), pick a game. Let's consider baseball. We'd be able to say that any game located both up and to the left of that game (the red region below) has a higher relative influence of chance over skill than the game under consideration, because the game has higher chance and lower skill. Similarly, any game located both down and to the right of that game (the green region below) has a higher relative influence of skill over chance than the game under consideration. This is easy to visualize on the chart and, mathematically, this means that any function which maps skill and chance into their relative influence must be componentwise monotone in its two inputs. However, if one game has both more skill and more chance than another, then they cannot be compared, hence, all that we get is a partial ordering on the relative influence of skill and chance. This wouldn't end up revealing much about poker's ranking in predominance, as it is a game that, from any perspective, surely lies near the top-right corner of this chart. 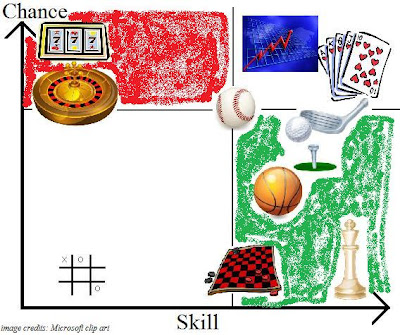 If we were able to well-order each of the skill and chance axes, then we'd automatically get a partial (but incomplete) ordering on the relative influence of skill and chance.
Instead, we have neither, only a partial ordering on each of skill and chance. So, we've got a set of objects where we care about generating a single quantitative ordering for them, where the two characteristics which are to generate this ordering are independent of each other and neither has even a well-ordering. This is, at best, an incomplete problem. Functions that map skill and chance to a number based on some approach to their relative influence can still exist, as discussed in the first thought in this series, but the fact that predominance presupposes inferring a quantitative measure on components which can't be quantitatively ordered themselves serves to highlight the lack of clear logical foundation to the question.


Part 9: Common intuitive proxies for skill and chance in games -->